The company bringing self-driving technology to the seas 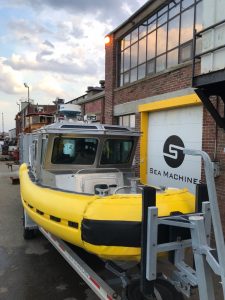 July 20, 2017 — Sea Machines Robotics is focused on developing autonomous technology for the commercial vessel industries. Following a recent capital investment and the growing global interest from the marine sector, the company has been expanding its crew and is poised for further growth, expecting to deliver 1st generation systems to marine customers this summer. Over the past past two months, Sea Machines has added multiple new members to its experienced team of engineers, scientists, and mariners.

Among the hires includes Phil Bourque as Director of Business Development. Along with building the sales & marketing structure of the company he is spearheading a global initiative of engaging in partnerships with commercial marine companies.

“Phil’s marine relationships span the Americas, EMEA and APAC regions and he will be a key part of bringing the Sea Machines technology to the global market”, says CEO Michael Johnson.

Phil comes to Sea Machines with a background in International Sales Management, having built much of the global sales and support network for Seakeeper Inc, the leading manufacturer of marine gyrostabilizers. “I enjoy the challenge of working with advanced technology and Sea Machines represents the latest of offerings that allow operators to modernize their fleets. There are countless applications where autonomy can benefit workboats and security vessels; its exciting to be at the forefront of this new wave”, Phil commented.

Sea Machines sells its autonomous system as kits to boat builders and retrofit projects around the world. Retrofit projects will be supported by a global network of certified installers. The company’s first product, the SM300, allows vessels to be operated from a remote station, providing direct joystick control and computer-station based collaborative autonomy.

About the company:
With its base in Boston, Sea Machines Robotics is located in a global tech hub that is pioneering software and robotics creation- yet is also rich in maritime history.  Sea Machines recently acquired its second test boat, a 25’ SAFEboat high-speed response vessel.  Future versions of the SM300 will allow for more complex autonomous applications, such as collaborative tug boat operations, dredging, and ferry automation. Further information is available at www.sea-machines.com and Twitter @SeaMachines.