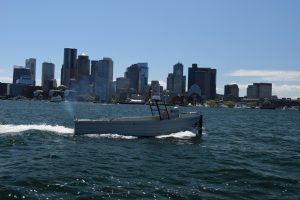 May 11, 2017 – Sea Machines Robotics today announced that it has raised $1.5 million in seed financing from lead investor Launch Capital, along with Accomplice VC, LDV Capital, the Geekdom Fund and Techstars.

Sea Machines is changing the way humanity works on water. The Boston-based company is developing autonomous self-driving control technology for commercial vessels which will herald a smarter, safer and more efficient era of marine operations.

The company will use the funding to accelerate product development, marketing, and sales of its industrial-grade vessel control system, which is expected to be released in 2017.

“This is a massive emerging market and with our 1st generation system we are targeting the work boat sector, a class of vessels where our technology provides immediate perceivable value for owners and operators.” says Mic Johnson, founder of Sea Machines Robotics.

The company provides industrial-grade control technology and is collaborating with Siemens Industrial in using their proven marine PLC and automation hardware within the Sea Machines 3X autonomy system.

“Similar to the Industry 4.0 transformation that the manufacturing sector is experiencing, the maritime industry is under increased pressure due to its massive domain across all oceans, more regulations, space constraints and the safety of professional mariners,” says David Grucza, Director, Drilling and Marine Solutions for Siemens Process Industries & Drives, U.S.  “Autonomous technology heralds in a new smarter, safer and more efficient era of oceanic operations, and Sea Machines Robotics is demonstrating the viability of remotely-commanded, self-aware and self-piloting surface vessels,” added Grucza.

Sea Machines is led by accomplished marine professionals who are known for their leading roles in major ocean projects such as the mega-salvage of the wrecked Italian cruise ship COSTA CONCORDIA.  The company has completed a year of on-water testing in Boston Harbor and this summer is conducting collaborative multi-vessel trials with commercial operators in common offshore tasks such as hydrographic and bathymetric surveying and oil-spill response.

The greater Boston-area has been the birthplace of the world’s leading underwater autonomous vehicle companies, and now Sea Machines is taking the baton to lead the emergence of self-driving commercial surface vessels.

Sea Machines Robotics (Boston) is a new technology company focused on bringing autonomous self-driving systems to the marine and maritime industries.  Further information is at www.sea-machines.com and Twitter @SeaMachines.